Let’s wrap this up by looking at the rest of the data concerning the Short Fiction categories of Novella, Novelette, and Short Story. Remember, these stories receive far fewer votes than the Best Novel category, and they are also less centralized, i.e. the votes are spread out over a broader range of texts. Let’s start by looking at some of those diffusion numbers: 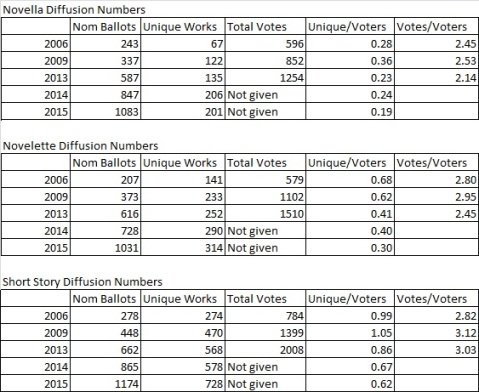 Remember, the data is spotty because individual Worldcon committees have chosen not to provide it. Still, the table is very revealing: the Short Story category is far more diffuse (i.e. far more different works are chosen by the voters) than either the Novella, Novelette, or Novel categories. To look at this visually: 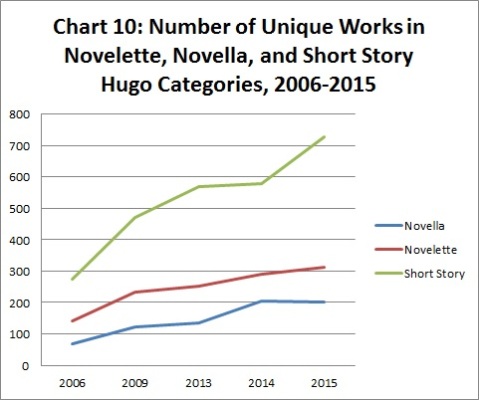 In any given year, there are more than 3 times as many unique Short Stories nominated as Novellas. Now, I imagine there are far more Short Stories are published in any given year, but this also means that it’s much easier—much easier—to get a Novella nomination than a Short Story nomination. More voters may make something like the Short Story category more scattered, not more centralized, and this further underscores a main conclusion of this report: each Hugo category works differently.

This diffusion has some pretty profound implications on nominating %. Remember, the Hugos have a 5% rule: if you don’t appear on 5% of the nominating ballots, you don’t make the final ballot. Let’s look at the percentages of the #1 and the #5 nominee for the Short Fiction categories:

I think these percentage numbers are our best measure of “consensus.” Look at that 2011 Novella number of 35%: that means Ted Chiang’s Lifecycle of Software Objects appeared on 35% of the ballots. That seems like a pretty compelling argument that SFF fans found Chiang’s novella Hugo worthy (it won, for the record). In contrast, the Short Story category has been flirting with the 5% rule. In both 2013, only 3 stories made it above 5%, and in 2014 only 4. You could interpret that as meaning there was not much agreement in those years as to what the “major” short stories were. If you think the 5% bar is too high, keep in mind that each ballot has 5 votes, and each voter often votes for 3 works. That means that appearing on 5% of the ballots means you only got around (5%/3) = 1.67% of the total vote. If a story can’t manage that much support, is it Hugo worthy?

Now, this may be unfair. There might simply be too many venues, with too many short stories published, for people to narrow their thoughts down. Given the explosion of online publishing and the economics of either paying for stories or getting free stories (I’ll let you guess which one readers like more), there may simply be too much “work” for readers to agree upon their 5 favorite stories in the nominating stage. Perhaps that what the final stage is for, and it’s fine for the nominating stage to have low % numbers. Still, these low numbers make these categories very easy for either slate sweeps or other undue influences, even including “eligibility” posts. Either way, this should be a point of discussion in any proposed change to the Hugo award.

The landscape of SFF publishing and blogging has changed rapidly over the last 10 years, and the Hugos have not made many changes to adapt to this new landscape. Some categories remain relatively healthy, with clear centralization happening in the nomination stage. Other categories are very diffuse, with little agreement amongst the multiplicity of SFF fans.

To these complexities, we have to think about how much scrutiny the Hugos are under: people—myself included, and perhaps worst of all—comb through the data, looking for patterns, oddities, and problems. No longer is the Hugo a distant award given in relative quiet at the Worldcon, with results trickling out through the major magazines. It’s front and center in our instant reaction world of Twitter and the blogosphere. A great many SFF fans seem to want the Hugo to be the definitive award, to provide some final statement on what SFF works were the best in any given year. I’m not sure any award can do that, or that it’s fair to ask the Hugo to carry all that weight.

So, those rather tepid comments conclude this 5 part study of Hugo nominating ranges. All the data I used is right here, drawn primarily from the Hugo nominating packets and the Hugo Award website: Nominating Stats Data. While there are other categories we could explore, they essential work on similar lines to what we’ve discussed so far. If you’ve got any questions, let me know, and I’ll try to answer the best I can.