We’re up to the short fiction categories: Novella, Novelette, and Short Story. I think it makes the most sense to talk about all three of these at once so that we can compare them to each other. Remember, the Best Novel nomination ranges are in Part 3.

First up, the number of ballots per year for each of these categories: 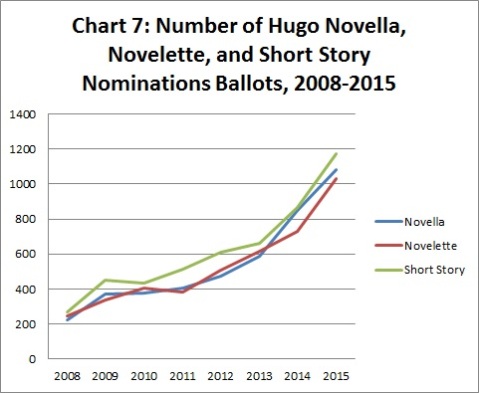 A sensible looking table and chart: the Short Fiction categories are all basically moving together, steadily growing. The Short Story has always been more popular than the other two, but only barely. Remember, we’re missing the 2007 data, so the chart only covers 2008-2015. For fun, let’s throw the Best Novel data onto that chart:

That really shows how much more popular the Best Novel is than the other Fiction categories.

The other data I’ve been tracking in this Report is the High and Low Nomination numbers. Let’s put all of those in a big table:

Here’s the Short Story graph; the Novella and Novelette graphs are similar, just not as pronounced: 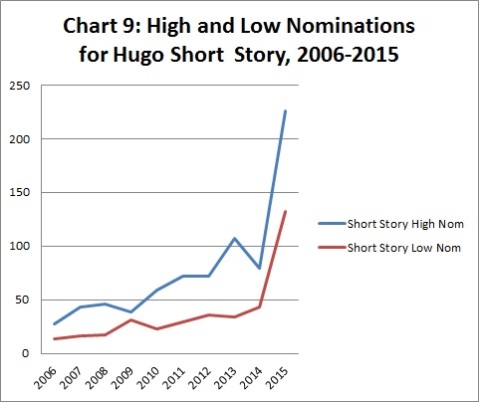 The Puppies absolutely dominated this category in 2015, more than tripling the Low Nom number. They were able to do this because the nominating numbers have been so historically low. Does that matter? You could argue that the Hugo nominating stage is not designed to yield the “definitive” or “consensus” or “best” ballot. That’s reserved for the final voting stage, where the voting rules are changed from first-past-the-post to instant-run-off. To win a Hugo, even in a low year like 2006, you need a great number of affirmative votes and broad support. To get on the ballot, all you need is focused passionate support, as proved by the Mira Grant nominations, the Robert Jordan campaign, or the Puppies ballots this year.

As an example, consider the 2006 Short Story category. In the nominating stage, we had a range of works that received a meager 28-14 votes, hardly a mandate. Eventual winner and oddly named story “Tk’tk’tk” was #4 in the nominating stage with 15 votes. By the time everyone got a chance to read the stories and vote in the final stage, the race for first place wound up being 231 to 179, with Levine beating Margo Lannagan’s “Singing My Sister Down.” That looks like a legitimate result; 231 people said the story was better than Lannagan’s. In contrast, 15 nomination votes looks very skimpy. As we’ve seen this year, these low numbers make it easy to “game” the nominating stage, but, in a broader sense, it also makes it very easy to doubt or question the Hugo’s legitimacy.

In practice, the difference can be even narrower: Levine made it onto the ballot by 2 votes. There were three stories that year with 13 votes, and 2 with 12. If two people had changed their votes, the Hugo would have changed. Is that process reliable? Or are the opinions of 2—or even 10—people problematically narrow for a democratic process? I haven’t read the Levine story, so I can’t tell you whether it’s Hugo worthy or not. I don’t necessarily have a better voting system for you, but the confining nature of the nominating stage is the chokepoint of the Hugos. Since it’s also the point with the lowest participation, you have the problem the community is so vehemently discussing right now.

Maybe we don’t want to know how the sausage is made. The community is currently placing an enormous amount of weight on the Hugo ballot, but does it deserve such weight? One obvious “fix” is to bring far more voters into the process—lower the supporting membership cost, invite other cons to participate in the Hugo (if you invited some international cons, it could actually be a “World” process every year), add a long-list stage (first round selects 15 works, the next round reduces those 5, then the winner), etc. All of these are difficult to implement, and they would change the nature of the award (more voters = more mainstream/populist choices). Alternatively, you can restrict voting at the nominating stage to make it harder to “game,” either by limiting the number of nominees per ballot or through a more complex voting proposal. See this thread at Making Light for an in-progress proposal to switch how votes are tallied. Any proposed “fix” will have to deal with the legitimacy issue: can the Short Fiction categories survive a decrease in votes?

That’s probably enough for today; we’ll look at percentages in the short fiction categories next time.