The Hugo and Nebula Awards and Repeat Nominees: A Chaos Horizon Report

One of the basic hypotheses of Chaos Horizon is that the Hugo and Nebula Awards for Best Novel are predictable. That doesn’t mean we can predict them with 100% accuracy, but that by studying past patterns in the Hugo and Nebula awards, we can make statistical estimates as to what is likely to happen in the future.

One of the things that makes Chaos Horizon possible is that both the Hugo and the Nebula are very repetitive: they tend to nominate the same authors over and over again. In this report, we’ll look at how extensive repeat nominations are in the 2001-2014 time period. Like my last report on Dates and the Hugo award, I’ll break this up into several posts:

Methodology: Since this is a simpler study than the Hugo Awards date study, the methodology is simpler. I cross-referenced the list of Hugo and Nebula winners with the excellent Science Fiction Awards Database (sfadb.com) to see if each of the nominees from 2001-2014 had received a prior nomination for Best Novel. I kept the Hugo and Nebula award lists separate; i.e. I didn’t count someone as a repeat nominee for the Hugo if they had received a prior Nebula nomination, and vice versa.

With regard to dates, I’m using the 2001-2014 period so we can get a picture of how the Hugos and Nebulas operate in the 21st century. I believe that the awards have changed substantially since the 1980s and 1990s, and including data from previous eras (before there were e-books or widespread internet usage) would skew the data.

Results: The first thing we’ll look at is the number of repeat nominees in both the Hugo and Nebula awards.

For the Hugo Awards for Best Novel, there were 72 nominated books between 2001-2014. For 47 of those 72, the authors had received at least one prior nomination for the Best Hugo Novel Award. This left only 25 “first timer” nominees in that 14 year period, or less than 2 per year. The Hugo is a difficult slate to crack into, but once you make it into the club, you’re very likely to get nominated again.

The Nebula is a little friendlier to first timers. In the 2001-2014 time period, there were 87 total books nominated. 43 of those were by repeat nominees, and 44 by first timers. Let’s take a look at that visually: 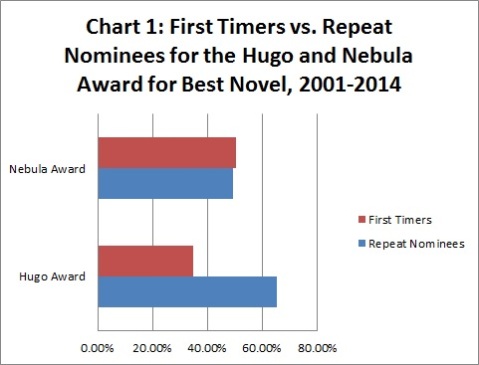 The best indicator—by a long shot—of future award success is past award success. I’ll leave it up to you to decide whether or not this level of repeat nomination is healthy for the awards.

In our next post, we’ll look at how centralized these awards are: exactly how many of these repeaters are there, and are there “super repeaters” that dominate the Hugo and Nebula slates?