I’ll cut right to the chase: I’m bullish on Uprooted‘s chances in the 2016 awards season. A lot factors point to this being the break-out novel of 2015: Ellen DeGeneres snapped up movie rights. The book has been doing absolutely gangbusters on Amazon and Goodreads; as of late September, this has 620 reviews on Amazon, with a 4.5 score. On Goodreads, this has 16,133 ratings (!), with a 4.21 score. Those are very high numbers for a Hugo and Nebula contender. Compare those to last years Hugo winner, The Three-Body Problem. Cixin Liu’s book is still sitting (after wining the Hugo) at 467/4.4 at Amazon, and 7041/4.0 at Goodreads.

Part of the reason Uprooted has been a break-out book is its unusual approach. This novel, from cover to content, has a “fairy-tale” feel without imitating any specific fairy tale. This novel tells the story of a young woman named Agnieszka. She’s taken to a wizard’s tower, where she at first seems to prisoner and then becomes a witch-in-training. We’ve got shades of Rapunzel, Beauty and the Beast, etc. Then the novel shifts gears, and we end up having a confrontation with the corrupted Wood, a kind of moving forest of evil that threatens the land. Uprooted is a wide-ranging book, bringing in plots that involve magic education, romance, and even war.

Since fairy-tales are one of the obvious roots of fantasy literature, this book has plenty of appeal for a broad fantasy audience. More than that, the fairy-tale approach make this seem original and important book. It’s very different than your typical epic fantasy, and I think this will follow in the footsteps of something like The Goblin Emperor. If anything, I think this book is stronger, more original, and more appealing than the Addison. Add in that this book seems to be about 10x as popular as Addison’s book . . .

Novik has been writing her well-regarded Temeraire series for years, a kind of Napoleonic wars with dragons series, and this is her first step outside that familiar territory. Hugo and Nebula voters tend to reward authors when they begin new series. Since this is an accessible starting point for new readers, it makes more sense to nominate Uprooted than volume #7 or #8 of Temeraire. Novik does have one prior Hugo nomination, back in 2007 for Her Majesty’s Dragon.

A lot of the question for 2016 will revolve around the Hugo controversies swirling in the field. Those uncertainties might substantially change voting patterns. If such changes were out of the equation, I think Novik would be a shoo-in for the Hugo and Nebula. I wouldn’t even be shocked to see Novik win some major awards next year, although we’re probably too early to predict that.

Even with various campaigns, expanded Hugo electorates, and other kerfuffles, I think Uprooted has an excellent chance. It’s widely read, original, positively reviewed, and written by an author with a prior Hugo nomination. That’s pretty much the Hugo profile in a nutshell. 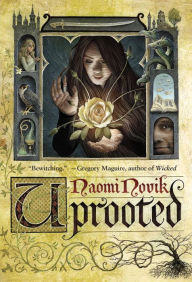 Good but not great mainstream coverage. The mainstream only tends to push books if they’re by super well-known writers (William Gibson, Neil Gaiman); I think Uprooted was more of a surprise word-of-mouth success.

This is as positive a slate of reviews from the SFF world as you’ll see. It’s already being hailed as a “great book,” an “enchanted forest,” as one of the best of the year, as a new and exciting step forward for Novik. I think these reviews are more influential in the Hugo/Nebula process than the mainstream. What’s more important is that is early reviews seem to have led to word-of-mouth success. There will be times a book gets positive SFF coverage but doesn’t break out of the core; Uprooted seems to have a very broad reach.

I could have added another dozen links if I wanted to—this book has been broadly reviewed and discussed amongst my fellow WordPress bloggers. As you’d expect, we’re a feisty bunch, and no one agrees on everything. Overall, though, the reviews are highly positive, singling this out as a unique, original, and unexpected 2015 read. Broad reception really helps in the Hugos: the more people read a novel, the more people can fall in love with it. Remember, you get a nomination based on having a highly passionate group of readers, not necessarily across the board consensus. It looks to me that Uprooted has exactly that.

My Take: I’ve been trying to add short microreviews of my own to these Review Round-Ups; I think readers need to be able to see my own biases and tastes so they can decide whether or not to trust me. My reading experience with Uprooted split neatly in half: I greatly enjoyed the first part of the book. I thought it’s ability to weave the familiar with the unfamiliar was striking, and drawing on fairy tales without reproducing classic fairy tales was original and exhilarating. I liked Novik’s prose style, and she has some well-crafted sentences and scenes, and the Wood certainly comes across as frightening and sufficiently mysterious.

Then the book shifts gears in the second half, and settles into Novik’s more familiar territory, being a kind of war novel between the Wood and the main characters. This part didn’t work for me; I never felt I fully grasped the “rules” of what the Wood or the wizards/witches could do. This made the battle sequences feel incoherent—instead of being involved in the war, I was taken out by the new powers that were constantly being introduced. I imagine that other readers might feel differently; there’s enough romance to keep driving the plot forward, and others might found those battles fun. Individual taste is individual taste; if the book would have ended on page 200, I probably would have given it an 8.5 or a 9, and it would have been my third or fourth favorite book so far this year (the one-two punch of Sevenves and Aurora are currently at the top of my list). I found the second half boring, and that drags my score down to a 7.5.

So, what do you think of Uprooted‘s chances? 9 months from now will Novik be celebrating a Hugo/Nebula sweep? I think it’s a strong possibility, but this year is going to be so chaotic that it’s too early to say.