The Hugo is a strange award. One Hugo matters a great deal—the Best Novel. It sells copies of books, and defines for the casual SFF fan the “best” of the field. The Novella, Novelette, and Short Story also carry significant weight in the SFF field at large, helping to define rising stars and major works. Some of the other categories feel more like insider awards: Editor, Semiprozine. Others feel like fun ways to nod at the SFF fandom (Fanzine). All of them work slightly differently, and there’s a huge drop off between categories. That’s our point of scrutiny today, so let’s get to some charts.

First, let’s get some baseline data out there: the total number of nominating ballots per year. I also included the final voting ballots. Data gets spotty on the Hugo website, thus the blank spots. If anyone has that data, point me in that direction!

Table 2: Total Number of Nominating and Final Ballots for the Hugo Awards, 2006-2015

I pulled that data off the HugoAward.org site, save for the flagged 895, which I grabbed from this File 770 post.

Table 3: Average Number of Nominating Ballots in the Hugo Award per Category, 2006-2015

I included to averages for you: the 2006-2015 average, and then the 2006-2013 average. This shows how much the mix of Loncon, the Puppy vote, and increased Hugo scrutiny have driven up these numbers.

What this table also shows is how some categories are far more popular than others. Several hundred more people vote in the Novel category than in the next most popular category of Dramatic Long, and major categories like Novella and Novelette only manage around 50% of the Novel nominating vote. That’s a surprising result, and may show that the problem with the Hugo lies not in the total number of voters, but in the difficulty those voters have in voting in all categories. I’ve heard it mentioned that a major problem for the Hugo is “discovery”: it’s difficult to have a good sense of the huge range of novellas, novelettes, short stories, etc., and many people simply don’t vote in the categories they don’t know. It’d be interesting to have a poll: how many SFF readers actually read more than 5 new novels a year? 5 new novellas? I often don’t know if what I’m reading is a novella or a novelette, and does the lack of clarity in this categories hurt turnout?

Let’s look at this visually:

Poor Fan Artist category. That drop off is pretty dramatic across the award. Are there too many categories for people to vote in?

Table 4: Percentage of Voters and “Missing Votes” per Hugo Category, 2015 Only 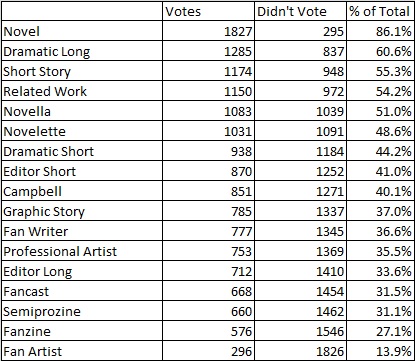 The chart at the top tells us a total of 2122 nominated in the Hugos, but no category managed more than 87% of that total. The missing votes columns is 2122 minus the number of people who actually nominated. I was surprised at how many people sat out each category. Remember, each of those people who didn’t vote in Best Novel, Best Short Story, etc., could have voted up to 5 times! In the Novella category alone, 5000 nominations were left on the table. If everyone who nominated in the Hugos had nominated in every category, the Puppy sweeps most likely wouldn’t have happened.

That chart re-enforces the issue in the awards: less than 50% turnout in major categories like Novella, Short Story, and Novelette.

What to conclude from all of this? Total number of ballots isn’t as important as to who actually nominates in each category. Why aren’t people nominating in things like Short Story? Do the nominations happen too early in the year? Are readers overwhelmed by the sheer variety of works published? Do readers not have strong feelings about these works? Given the furor on the internet over the past few weeks, that seems unlikely. If these percentages could be brought up (I have no real idea how you’d do that), the award would immediately look very different.

Tomorrow, we’ll drill more deeply into the Fiction categories, and look at just how small the nominating numbers have been over the past decade.