The Hugo and Nebula Awards and Genre, Part 3

Yesterday, we looked at the Nebula slate; today, we’ll look at the Nebula winners. I show seven fantasy novels (out of 50 winners total; there was a tie in 1967) as having won the Nebula Award:

Interestingly, the 1980s were better for winning than the 1990s (we’ll see that also reflected in the Hugo in the upcoming days), and things have picked up a great deal in the last 15 years for fantasy. This is a pretty broad slice of fantasy: we have secondary world novels with Bujold and Le Guin, contemporary fantasy with Walton and Gaiman, and Wolfe’s nearly unclassifiable Dying Earth style book. Here’s the data and charts:

Table 2: Percentage of Science Fiction and Fantasy Wins for the Nebula Award for Best Novel by Decade 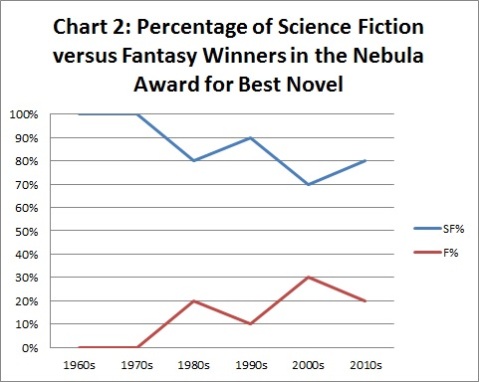 The chart is pretty zig-zaggy because we’re dealing with such small numbers (10 per decade), although you do see a gradual increase over time in the direction of fantasy wins. Still, the “win” chart is nowhere near as dramatic as the “nominee” chart, proving that it’s easier to get nominated as a fantasy novel than to win as a fantasy novel.

In an odd way, the more fantasy novels get nominated, the harder it can be for a fantasy novel to win, as the fantasy vote ends up getting split between the slate. 2013 is a perfect example of this: one SF novel faced off against 5 fantasy novels. 2312 ended up winning, because I imagine all the “the Nebula should go to a SF novel” SFWA voters voted for Robinson, and the fantasy votes were spread our across the other 5. If we’re considering genre alone, fantasy books are at a disadvantage of winning. Of course, genre alone does not determine the winner, as many other factors—familiarity, reception, popularity, demographics, etc.—also come into play.

In a statistical study like this, you have to think about what the “baseline” might be, i.e. what the stats would be like without bias. Is the Nebula an award moving toward a 50/50 split between fantasy and science fiction? Why should/would 50/50 be the baseline? Isn’t fantasy more popular than science fiction, at least in terms of readers in 2014? What about critical prestige? What about the nebulous and nearly impossible to define idea of “tradition”? How about the bias towards well-known authors? How about potential biases regarding gender? What about the bias against books in a series or sequels?

All of these are going to factors in the eventual fantasy/science fiction split the Nebula arrives at, and all these factors change over time. Trying to cross-correlate all those variables before we have a basic understanding is only going to result in mass confusion. As Chaos Horizon slowly builds up its data sets, the best we can do is think about the statistical moment we’re at right now, as predicting even the next 5 years is very difficult. So, to sum up the situation for the Nebula:

1. The Nebula slate breaks into three eras: a 15 year period (1966-1980) where fantasy was largely excluded, a 30 year period (1980-2010) where fantasy was around 25%-30% of the slate, and a more recent era (2010-2014) where fantasy has overtaken SF on the slate. Are the last 5 years a statistical aberration or something that is likely to continue?
2. The Nebula winners have been more consistent since 1980, accounting for around 20% of the wins, with a general increase in % of winners over time. Be aware that these conclusions are shakier because the numbers are smaller. Nonetheless, fantasy novels have underperformed on the slate, winning at a smaller proportion than their SF peers.

Tomorrow, we’ll look at how the Hugo Award nominees have shaped up! Any questions so far?