Boom! Bang! Flutter! Whatever sound you think books make when they sell, that’s the sound Station Eleven is making right now. Mandel’s literary take on the post-apocalyptic novel has been roaring over in the mainstream world. Supported by venues like Amazon.com (where it was declared the “Best SF Novel of 2014”), Entertainment Weekly, and a 2014 nomination for the National Book Award, it has been a break-out hit, and has received so much attention it’s bound to make some noise in the SFF world. Since Chaos Horizon is a blog dedicated to predicting the Hugo and Nebula awards, what chance does Station Eleven have this award season?

A decent one, particularly for the Nebula. To put Mandel’s popularity in perspective: as of December 17, 2014, Goodreads.com is showing 13,500 reader ratings, and Station Eleven has already added 3,500+ new readers since December 1st. If we compare that to some of the other Nebula contenders, the results are stark. Robert Jackson Bennett’s City of Stairs currently clocks in at around 2,000 readers. Mandel is on pace to double that this month alone. Take last year’s Hugo and Nebula winner Ancillary Justice; despite that huge push from the SFF world, she’s still sitting at 11,500 ratings.

Thus is the power of the mainstream critical world. By tapping Mandel as the darling of the season, they’ve guaranteed she’s going to be broadly read. If it weren’t for The Martian, Mandel would likely wind up as 2014’s most popular science fiction novel. Popularity, though, is only one thing that impacts the Hugos and Nebulas: what is the SFF world going to think of Mandel’s book?

That’s a tougher question. The SFF world has been slow to review Mandel’s book: Tor.com doesn’t have a review up yet, and neither does Locus Magazine. There’s often some trepidation regarding books like this: is this a hit-and-run author, someone will write one SF-lite book before retreating back into the fortress of literary fiction? Is she just using SF to be “edgy” and “cool,” or does she have a meaningful relationship with the genre? Only time will answer those questions, but the SFF world can be very resistant to books branded “better than your typical SF novel.” Neither The Road nor Never Let You Go grabbed Hugo or Nebula nods. In contrast, sometimes these novels do break through: The Yiddish Policeman’s Union won both awards, and books like We Are All Completely Beside Ourselves and The Golem and the Jinni grabbed Nebula noms just last years. Which path will Mandel follow?

Mandel’s novel charts the inter-connected fortunes of a group of characters both before and after a society-ending flu pandemic. The novel opens up during a performance of King Lear, where an aging actor dies of a heart attack. The flu breaks out almost immediately after, and Mandel traces a variety of characters and their relationship to this dead actor (who turns out to be a Brad Pitt style Hollywood celebrity). Divorced multiple times, we get long sections concerning his former wives and how those marriages collapse, including his strained relationship to his young son. We also learn about one of his paparazzi, who has coincidentally become a EM technician who tries to save him at that fateful King Lear performance. Station Eleven is laced with connections like that, as Mandel shows what she calls the “half life of marriage” and the way human interconnections and relationships spread forward and backward through history, even across the line of an apocalypse. The intense focus on the meaning of human connectivity gives Station Eleven a very different feel, and it has certainly opened up the book to a very mainstream audience.

Many of these characters survive the pandemic, and we get to hear about their wanderings some 20 years later in a decimated Canada/America (Mandel is Canadian, as are many of her main characters), largely as part of a travelling Shakespearian troupe. The Station Eleven is a comic book written by one of the actor’s wives, and it winds up in the hands of some of the children who survive the flu; you’ll either find that coincidence deep and meaningful or twee and manipulative.

For fans of literary fiction, Mandel reads like she’s brought together elements of The Road (but much less violent), A Visit from the Goon Squad (the focus on celebrity and character interconnection), and The Amazing Adventures of Kavalier & Clay (the comics stuff). That’s learning from three former Pulitzer Prize winners, so it’s no wonder this book is being gobbled up by the literary mainstream. From that perspective, it’s a great referendum on what’s been happening on the literary/genre boundary over the past decade.

Station Eleven might be a stronger contender for the Pulitzer than the Nebula. From a more speculative perspective, the book is more interested in character than it is in world-building, and the post-apocalyptic aspects of the book are probably its weakest. In many ways, Mandel treats the pandemic symbolically rather than realistically, and her ruined society of the future doesn’t seem particularly accurate or well-imagined. Her interest is in relationships, not the nuts-and-bolts of starting up generators and getting the electricity going once again.

Whether or not readers—and Nebula voters—find this a telling flaw is up in the air. Will SFWA voters embrace the emotional and character-driven aspects of the work, or will they see this as “not speculative enough” for the Nebula? Ultimately, I see Mandel as a viable Nebula candidate (I currently have her at #6), but I want to see more SF specific reviews to see just exactly what dedicated SFF critics are thinking of this book. 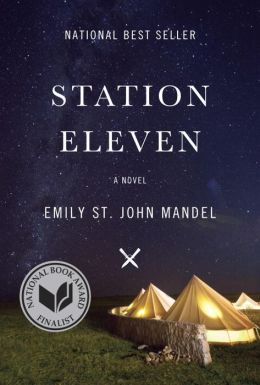 The New Yorker also had a big article about genre and Station Eleven that is worth a read. Mandel’s biggest mainstream impact, though, has come from “Best of 2014” lists that have consistently put her book at or near the top.

WordPress Blog Reviews:
Intellectus Speculativus
Raging Biblio-Holism (4.5 out of 5)
Cold Read (B)
Reading as Fast as I Can
Necromancy Never Pays
So Many Books
Bookworm Tales (4 out of 5)
A Bibliophile’s Reverie (complete with a tea recipe: nice touch!)
Relentless Reading (4 out of 5)

A wide-range of reviews, and the best way to describe most of them is as “qualified enthusiasm.” The most common word that came up in these reviews was “beautiful,” high praise for Mandel’s prose and characters. The enthusiasm was a little tempered when it came to world-building, and several reviewers pointed out the relative weakness of her post-apocalyptic setting.

Once you step away from the SFF focused blogs, the enthusiasm for the book becomes far more unqualified, with plenty of praise being heaped on Mandel for her rich characters and emotional world. I thought the inevitable comparison to The Road worked well in some of these reviews, drawing a useful contrast between McCarthy’s nihilism and Mandel’s optimism.

So, that’s the basics on this year’s most-buzzed about literary SF novel. What are Mandel’s chances?