Young Adult Fiction and the Hugo and Nebula Awards, Part 3

Let’s get right into it. The slice of the Nebula pie for YA novels is even smaller than the Hugo’s 6%: 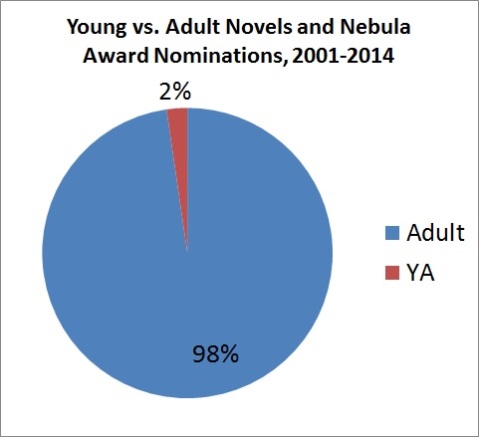 Once again, we have 2009 as the outlier year, and both Le Guin and Doctorow were already well known to Nebula voters. Le Guin, in particular, has such a formidable Nebula reputation that I’m not sure this should be seen as a win for YA fiction, but rather as a win for Le Guin. Nonetheless, part of Le Guin’s reputation is tied to her YA Earthsea series; if anyone is going to win a Nebula for a YA novel, it’s Le Guin.

If you want to feel better about YA fiction, we can make the same observation we made about the Hugo: YA fiction has a hard time making the slate, but, once it’s on the slate, it wins. Of course, 1 win in a 14 year period isn’t a significant enough sample size to make real conclusions.

The Andre Norton Award for Young Adult Science Fiction and Fantasy was established by the SFWA in 2005, and while this has been a great venue for honoring YA fiction, it may have removed any YA novels from serious Nebula consideration. In the decade since we’ve had the award, no novel has appeared both on the Andre Norton slate and on the Nebula slate. Even novels that might have received some Nebula consideration in the past such as Delia Sherman’s The Freedom Maze or Nalo Hopkinson’s Sister Mine found themselves “only” winning the Andre Norton.

Since the Andre Norton process runs parallel to the Nebula, and is voted on by the same pool of SFWA writers, I imagine voters have been only nominating a novel for either of the awards, not both. The fact that Le Guin or Doctorow did not receive Andre Norton nominations can act as confirmation of this, although we lack enough data to draw a true conclusion.

So, just like the Hugo, YA novels have difficulty making the Nebula slate: 2% is a very small number. When we add other observations about which YA novels were nominated—one from a SFWA grandmaster, and the other from a well-regarded prior Nebula nominee—it’s hard to argue that any YA novels are likely to make future Nebula slates. Awards change over time, and there’s nothing stopping from SFWA writers from shifting how they vote. However, based on the patterns of the past decade+, it does not appear those voters are considering YA novels in any serious way for the Nebula.

Tomorrow, I’ll wrap up this report, and then we can turn to thinking about any potential YA Hugo or Nebula nominees for 2015.