In many ways, Cixin Liu’s The Three-Body Problem was the most important SF novel published in English in 2014. Already a best-seller in China, The Three-Body Problem deals with the Cultural Revolution, the meaning of scientific knowledge, and the transforming/disruptive power of alien contact. On it’s surface, this is a book about Chinese scientists grappling with first contact, as they attempt to communicate with an advanced alien civilization and to prepare Earth for the coming of those aliens. More profoundly, it is a book about disruption (the third-body of the title), and how seemingly stable systems (East/West, science/faith, etc.) fall apart in the face of increased complexity.

Like the third-bodies of his title, Liu provides a powerful alternative to models of SF (and thought) currently popular in the United States and the United Kingdom. The American-British science fiction scene has been remarkably insular over the past few decades, largely ignoring what’s going on in SF in the rest of the world. While a few Japanese SF writers are beginning to creep in, largely via the Haikasorou imprint, The Three-Body Problem was published by Tor (one of the premier SFF presses), translated by a rising SFF star in Ken Liu, and had the kind of marketing push that only a major publisher can provide. As such, Liu has more of a chance of making an impact on the current SF scene.

The Three-Body Problem is probably too strange and too unusual to factor into the 2015 Hugo and Nebula awards, both of which have scrupulously avoided foreign-language authors over the past several decades. At some point, the American-British focus of those awards is going to snap, but I doubt it’s this year. The Three Body-Problem is also a difficult book, asking readers to leap from the Cultural Revolution to the political meaning of the Copenhagen interpretation, from nanomaterials to a video game, from first contact to political revolutions. Figures from Chinese history jostle against Western scientists like Newton and Einstein. While I enjoyed the demands this book placed on the reader, and found the flow of ideas fascinating, I can also understand how this might be off-putting to a casual or crossover science fiction fan. Liu is not particularly interested in characters or plot in a more conventional sense, and someone looking for those narrative aspects is likely to be disappointed by The Three-Body Problem.

Lastly, Liu freely moves from realism to allegory in ways that likely challenge his reading audience. While some of the scientific sections are sound, others are deliberately exaggerated. Near the end, there’s a bravura sequence where an alien civilization “unravels” a proton from 11 dimensions to 1, 2, and 3 dimensions, and then inscribes some sort of computer on that seemingly miniscule space. It’s one of the most fascinating pieces of bullshit I’ve read in years, but it is bullshit nonetheless. This is SF that isn’t afraid to break from realism, and I think Liu uses that break from reality to profound effect. While this echoes some of what Haruki Murakami is doing with his work in Japan, it’s a new concept for American and British SF writers, and I imagine it will take years for us to fully process how Liu is changing the rules of SF. I suspect the second part of this trilogy–coming out next year–will help us make more sense of this challenging work.

So, since Chaos Horizon is an awards website dedicated to predicting the Hugo and Nebula award, what are Liu’s chances? None? There’s no precedent in recent Hugo or Nebula history for a foreign-language book to break into those awards, no matter how deserving. Hopefully The Three-Body Problem will starts discussions about that insularity, but discussions aren’t enough to grab nominations. I think this was an important book—in fact, it’s been my favorite SF book of 2014, and probably the most interesting SF novel of the last 4 or 5 years—but that’s not necessarily reflected in the awards. The Hugo and Nebula provide a fascinating mix of the popular, the important, and the familiar, and The Three-Body Problem would need a huge push from the SF press to get into awards convention. Given some of the reviews linked below, it doesn’t quite look like it’s catching on. We’ll see. 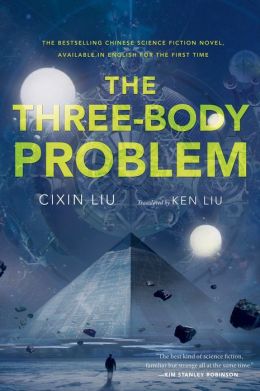 Originally published in Chinese in 2008.

About the Book:
Article by Cixin Liu on The Three-Body Problem
Goodreads page
Amazon page

An interesting mix of positive and negative. Three Body-Problem has gotten a good (not great) amount of coverage, but some of it has expressed reservations concerning Liu’s use of characters. Throw in a measured review at Tor.com (I don’t formally list Tor.com because I’m suspicious of Tor reviewing books it publishes), and we’re seeing a solid—but not overwhelmingly enthusiastic—mainstream reception.

WordPress Blog Reviewers:
Bree’s Book Blog (4 out of 5)
Bibliotropic (5 out of 5)
Mountain was Here
Intellectus Speculativus
The Dinglehopper
Violin in a Void (7 out of 10)
Michael Patrick Hicks
Avid Reviews (9 out of 10)

In general, a positive set of reviews, speaking highly of Cixin Liu’s mind-boggling ideas, with some reservations expressed due to lack of characterization and the complexity of some of the physics. I’d say that WordPress bloggers have actually done a better job of “getting” and “understanding” the novel than the mainstream reviewers have. Cixin Liu’s strengths as a writer make up for any weakness he might have in terms of structure, particularly if you allow yourself to be open to an entirely different model of SF.