Peter Watts is back with his first novel since Blindsight (2006). That novel picked up a nomination for the 2007 Best Novel Hugo (it lost to Rainbow’s End), and its reputation has only grown since. Elizabeth Bear called it “the best hard science fiction novel of the first decade of this millennium,” and the book placed 4th in Tor.com’s “Best SFF of the Decade” poll and 6th on LocusMag’s 21st Century All-Time poll. Those are some impressive credentials, and it means that Echopraxia, a semi-sequel set in the same universe as Blindsight and dealing with many of the same themes, might be well-positioned to make some serious Hugo and Nebula noise this year.

It’s difficult to describe Watts: his books deal with a dense array of themes, ranging from aliens, zombies, vampires, spaceships, the meaning of consciousness, and the ability of humans to make sense of their world. Echopraxia looks to extend those discussions, this time telling us the story of a technology-resistant biologist who finds himself on a strange spaceship surrounded by a range of post-human and biomechanical entities, struggling to keep the world in order. If that sounds baffling, it is, and trying to reduce Watts down to a simple statement of plot is pointless. These books are meant to be mind-boggling explorations of the far reaches of science. Go in spoiler-free and you’ll have a better time. If you’re looking for extended discussion of consciousness, a rigorous exploration of what technology might do to the idea of the “human,” and some space-action to boot, Watts is the writer for you.

I currently have Echorpaxia at #10 on my Hugo Watchlist. The eight year gap between Blindsight and this book hurts Watts chances; Hugo voters can be quick to forget an author. Furthermore, most of the “big ideas” of Echopraxia were introduced in Blindsight, making Echopraxia a little less exciting in contrast. Still, I wouldn’t be completely surprised to see Watts make the slate: there aren’t a lot of hard SF books like this out there, and if The Martian winds up being ineligible (for being indie published before 2014), I could see Watts grabbing that spot. Watts also has some solid recent Hugo history, including a win in 2010 for the novelette “The Island” and a 2011 short story Hugo nom. It will be really important to see how Echopraxia does on year end lists. Are people going to see this as a worthy successor to Blindsight, or a hashing over of the same ground? Only time will tell.

Watts has no Nebula history (0 nominations ever), so I don’t have him currently on the Nebula Watchlist.

On to the book: 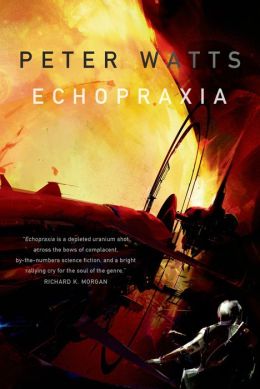 There’s also a review at Tor.com, but since Tor is the publisher, I think there’s a conflict of interest in reviewing your own book. What are they going to do, trash it? This is a lot fewer mainstream reviews than other big SFF books this year, and that may say something about the reach of Echopraxia: it’s for hardcore SF and Watts fans only.

Given that the book has been out since August (I’m putting this up October 5th. I know I’m behind), that’s not very many WordPress reviews. That says something about a book’s initial reception and initial popularity, both important factors in racking up awards attention and nominations. Furthermore, the reviews are pretty tempered—a lot of scores in the 70% range, which is low for a major SFF release. All of that might not matter—a book needs passionate fans, not fans across the board, to snag nominations. If the core of readers who loved Blindsight also love this novel, they can propel Watts to another nomination. If they find Echopraxia doesn’t live up to Blindsight, then no nomination for Watts.