Jo Walton’s previous novel, Among Others, was something of a surprise winner of the 2012 Hugo and Nebula awards. More of a meditation on growing up as an isolated and lonely SFF fan than a “traditional” speculative work, it rode a wave of good will to sweep the two major awards. Like many other recent Hugo and Nebula winners, it’s a book that launched a thousand discussions: is Among Others science-fictiony enough to win these awards? Where are the limits of genre? What kinds of books should these awards honor? Should the Nebula and the Hugo go to the same book?

Chaos Horizon is not in the business of policing genre, so we’ll have to put those fascinating and maddening questions aside. What Chaos Horizon does is use past Hugo and Nebula data to predict future winners and nominees. Since Walton was a double winner in 2012, it’s likely that My Real Childrem will receive strong consideration in 2015. The Publisher’s Weekly review (by Lev Grossman) nails this book when it calls it a “Schrodinger’s cat” kind of novel, as it gives us two alternative timelines for an aging woman looking back at her past. We don’t know which past is real, and we wind up with a quiet book that draws its tone from literary fiction, meditating on the branching possibilities of life. Taken in conjunction with Among Others, My Real Children shows Walton’s willingness to go beyond the boundaries of genre, and draw in material normally considered too “literary” or “slow” for more traditional SFF works. Some readers will value that experimentation; others will be turned off by it.

Among Others offered a strong nostalgia element, taking fans back to their own youths of reading and obsessing over SFF novels. My Real Children doesn’t provide that same thrill, so it’s likely to be a little less beloved than Walton’s last novel. The Nebula is more receptive to books that push the limits of the SFF/literary borderline, and it only takes a small number of passionate Walton fans to grab a nomination. I’ve currently got her in the field at #4 for my Nebula Watchlist, and at #6 on my Hugo Watchlist, although those might be too high. It’ll be interesting to see if she shows up on the yearly “Best of Science Fiction and Fantasy” lists, and we’ll have a better sense if this is being embraced as a “genre” novel.

On to the novel: 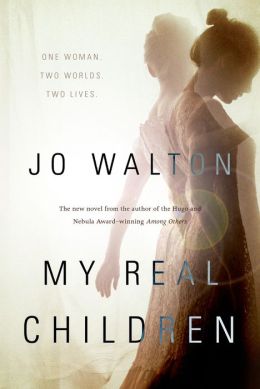 Since I’m doing this review Round-Up in September, some four months after the book was published in May, I pulled a good collection of reviews, but this list is by no means comprehensive. Reviews for My Real Children were uniformly positive, often calling the book “powerful” and “emotional” while noting its experimental nature. Judging by how this books has been received on WordPress, it does appear to be a very serious candidate for the 2015 Nebula: a book that makes an emotional connection with readers is much stronger than a book that merely entertains readers, at least for these awards. Interestingly, most reviewers didn’t score the book numerically, an indication they were approaching it more as literary fiction than science fiction.

Exactly what shakes out with My Real Children is going to be one of the more interesting 2015 Nebula and Hugo questions. You’d expect the 2012 winner to easily coast into nominations for these awards with her next book, but will that happen, and what does this say about how readers are accepting literary science fiction? Or will Walton’s sterling reputation, built on such clearly fantasy books as Tooth and Claw, be enough to overcome these genre questions?